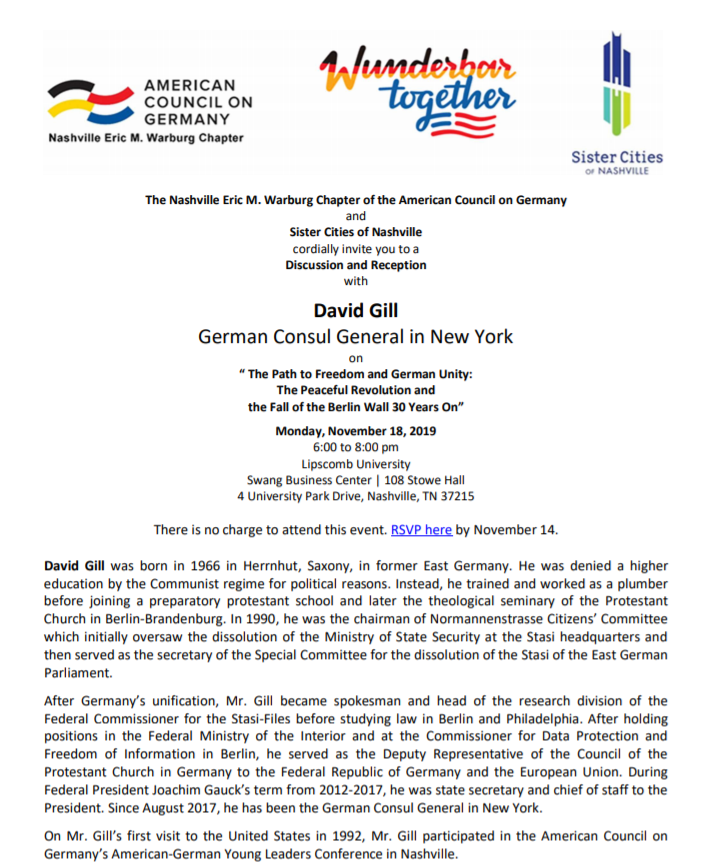 On November 18, Sister Cities of Nashville will be hosting a free public event on “The Path to Freedom and German Unity: The Peaceful Revolution and the Fall of the Berlin Wall 30 Years On” in partnership with the American Council on Germany and Wunderbar Together. It features a discussion and reception with David Gill, the German Consul General in New York who played a leading role in Germany’s peaceful revolution and reunification. More information is available here.

For more information on Sister Cities of Nashville:

SCI: Could you tell me a bit more about the exchanges and programs between these two sister cities? How often/how many participants? How can these programs continue to expand to address global challenges on a local scale?

The partnership between Magdeburg and Nashville has existed formally since 2003 but actually dates from a few years before that. My own involvement goes back to a trip to Magdeburg in the summer of 2000.

Official delegation visits occur every few years and are important milestones, but much of the life of the partnership is the cultural, educational, and civic connections and programs that have developed over the years. Annual high school student exchanges in both directions have been pretty much a constant in the relationship, and Magdeburg’s annual “Nashville Days” festival and our artist exchange are regular connections at present.

Other programs, including truly remarkable collaborations, have emerged in response to specific needs and opportunities. One among many that stand out for me was a 2009 panel discussion that brought together Nashville civil rights veterans and Magdeburg participants in the 1989 peaceful revolution. A second would be the benefit concerts that both cities held for the other after the Nashville flood in 2010 and the Magdeburg flood in 2013.

The partnership never really looks the same from one year to the next, and I see this as a strength of the relationship.

In terms of future opportunities to address global challenges, I hope that the Magdeburg-Nashville partnership can grow to include regular policy-focused conversations between city officials. A member of the Metro Nashville Council attended a conference in Magdeburg last year, loved the experience, and has commented since about the extent to which the two cities face similar issues. I would like to see genuine educational and professional development opportunities for local government officials become a part of the partnership.

SCI: Do you have a particular anecdote, a lesson, or an experience that shows the meaning of these exchanges?

After 19 years there are so many, and I’m not sure I could tell a single story that would do justice to the importance of the relationship. The recurring themes for me are: (1) the way that local connections, friendships, and common values have endured through significant challenges at the national level, (2) the benefits of seeing your own city reflected in the eyes of a long-term international partner (as opposed to a visiting tourist, for example), and (3) being able to explore surprising connections and similarities among the experiences and issues of people in both cities.

SCI: In your experience, how does the citizen diplomacy and information exchange facilitated through this partnership build mutual respect, understanding, and cooperation?

Citizen diplomacy in the context of a city partnership means thinking seriously about what your own city can bring to people in another country and then also staying informed about and connected to the other city. Nashville markets itself well and has an instantly recognizable international image, but of course it has a lot more to offer than that. The partnership with Magdeburg definitely celebrates Nashville’s country music identity, and our most recent delegation visit even included the presentation of a guitar signed by the members of our Metro Council, but every exchange is also a chance to discover more than that. The same goes for Magdeburg. It’s a great city, and you can get a lot of the high points from a brochure, but a partnership over sixteen years connects people in deeper ways.

SCI: How have Nashville and Magdeburg been able to collaborate to strengthen climate resilience in particular?

Magdeburg began hosting international “Green Cities” conferences in 2012, and there was discussion of a document called the “Magdeburg Protocol,” which is a voluntary commitment of city councils to integrate “ecological, climate-related” considerations in urban planning. Nashville did not participate in the “Green Cities” conferences, and I am not sure if these are continuing. Our Mayor’s Office did join the short #EarthtoParis Twitter conversation hosted by Sister Cities International in advance of the Paris Climate Conference in 2015, and this was also followed in Magdeburg. Of course this was a very small beginning on our side, but I see a lot of future potential here.

SCI: Oftentimes ideas of the US abroad are shaped mainly by knowledge of larger coastal cities. What insights can be gained from an exchange with a city in the South instead?

Nashville and Magdeburg both have a lot in common with larger cities, so I wouldn’t want to draw the contrast too starkly, but it’s true that they offer distinctive experience. When I have traveled with students to Germany, Magdeburg has clearly offered an experience of Germany that they don’t get in a place like Berlin, and I’m sure that’s also true of Nashville as opposed to larger cities in the United States. Like other Southern cities, Nashville has a very rich African American and Civil Rights history, and I certainly want that to be a part of every exchange.

SCI: Are you celebrating Wunderbar Together (aka the year of German-American Friendship)? How?

Yes. Jakob Lewis, working for Nashville Public Radio and with funding from the Goethe Institute, got a head start on this year’s celebration by visiting the “Nashville Days” festival in Magdeburg and producing a great audio piece titled “What is a Sister City Really?” Our local sister cities organization is also co-hosting one of the 1989 anniversary talks by German Consul General David Gill, who played a leading role in Germany’s peaceful revolution and reunification.

This blog post forms part of Sister Cities’ “Wunderbar Together” series, part of our ongoing involvement in “Wunderbar Together,” funded by the German Federal Foreign Office, implemented by the Goethe-Institut, and supported by the Federation of German Industries (BDI). This year, we are showcasing stories that highlight the impact of German-American exchange on the local level, as well as the heritage, interests, and common values shared by the United States and Germany. To submit your own experience with German-American exchange or involvement in a German-American sister city partnership, please fill out our form here.

Privacy & Data Consent (GDPR - CCPA)
To provide the best experiences, we use technologies like cookies to store and/or access device information. Consenting to these technologies will allow us to process data such as browsing behavior or unique IDs on this site. Not consenting or withdrawing consent, may adversely affect certain features and functions.
Manage options Manage services Manage vendors Read more about these purposes
View preferences
{title} {title} {title}

Do you need assistance?

Send us a message with a single click. We will reply as soon as possible.